The meaning and weight of Easter Sunday has become more and more important as we mature in our faith.

As 1 Corinthians 15:12-19 puts it, “if Christ is proclaimed as raised from the dead, how can some of you say that there is no resurrection of the dead? But if there is no resurrection of the dead, then not even Christ has been raised. And if Christ has not been raised, then our preaching is in vain and your faith is in vain…And if Christ has not been raised, your faith is futile and you are still in your sins. Then those who have fallen asleep in Christ have perished. If in Christ we have hope in this life only, we are of all people most to be pitied. But in fact Christ has been raised from the dead…”

…which was on the same day as Easter! The last time Cindy’s birthday fell on Easter Sunday was in 1998. She was really young and thought her birthday always fell on Easter so, for a while, Easter was her favorite holiday. According to Wikipedia, Easter won’t fall on April 12 again for at least another 20 years.

Like most people who have had birthday’s during this time, there wasn’t much to do. Jake was originally planning a “Bubble Soccer Day” with friends and family, which is something Cindy has wanted to do for a long time. Instead, we had a low-key but still fun & memorable birthday! 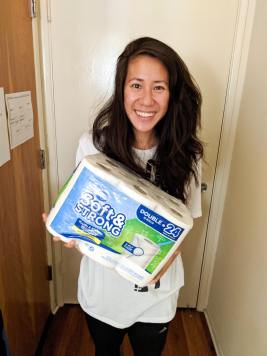 (toilet paper–the best gift you can get this year!)

We started the day with surprise birthday balloons and breakfast (and watching Easter service online). The day before, Jake made a trip to Trader Joe’s to get some flowers and some of Cindy’s favorite Trader Joe’s snacks.

Around early afternoon, we went for a walk. But not just any walk. We ventured into nearby neighborhoods in Santa Monica and Brentwood, and spent a couple of hours walking around and admiring the million dollar houses. We stumbled upon this one street called La Mesa Drive. It caught our eye because there was a tree corridor lined with GIANT fig trees. Apparently, this little half mile strip of street is well known for their massive trees. Supposedly, when they were planted about 100 years ago, they were thought to be magnolia trees. These HUGE fig trees definitely give off a different vibe than magnolia trees! This was Cindy’s favorite part of the day. It doesn’t seem like much, but she’s wanted to wander around these neighborhoods for a while. It was nice to finally get the chance! 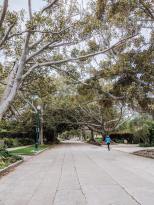 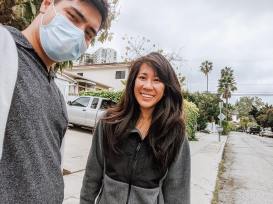 At night, we ordered dinner from one of Cindy’s new favorite restaurants, called C&O Cucina. They serve the best lemon pasta and garlic knots (in her opinion). We had some cake and also played video games.

And that was Cindy’s Quarantine Birthday!

Jake’s hair was starting to get really long and shaggy. It probably bothered Cindy more than it bothered Jake! For some reason, Jake allowed her to cut his hair after only watching 2 YouTube videos.

We didn’t have the right equipment– no scissors and only a beard trimmer. But it turned out okay!! Not great, but not TOO bad!