The title of this week’s blog post pretty much sums up our week!

On Saturday, we attended a baby shower for one of Cindy’s best friends (who was one of the bridesmaids in our wedding). It was a co-ed shower, so Jake came along! He was very excited about the shower, not only to see Cindy’s friend and her friend’s husband but also to experience his very first baby shower! He was pretty surprised by how baby showers “work” and he got a glimpse into “shower type events.” Overall, he really enjoyed it! 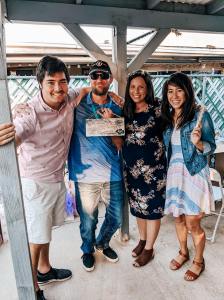 On the way home, Cindy was reflecting on her friendship. Cindy met her friend in grad school about 5 years ago. They went through a whole year of school without really knowing each other. It wasn’t until they were both sent to Menlo Park for an internship at the VA when they really began to hang out. They found out how much they have in common and spent a lot of time going to the movies after work, exploring the Palo Alto area, running, and studying. At the time, Cindy’s mentality towards the internship was more of a “get it done” attitude. She didn’t really want to leave LA and the three month internship was the one of last things she had to do before she was officially done with school. Anyways, on the drive back from the baby shower Cindy was thinking about how we never know just how significant a moment or an experience can be until much later on. And out of these small moments can sprout the most beautiful but unexpected friendships.

We’re up to 18 miles in our marathon training! We finished in approximately 2:45! This run was HARD– both physically and mentally. We really don’t know how we will do a marathon. 18 miles felt like death. But we are so proud of ourselves!

Right after running the 18 miles, we showered and hopped in the car to head to Six Flags! Call us crazy, because that really was crazy. When we got home, we were struggling to  walk from the  car to the front door of our apartment.

But Jake’s parents invited us and we really wanted to spend time with them (and also go on some coasters!). It was really fun going on all the different rides. Since it was Super Bowl Sunday there were no lines (thank goodness!). For most of the rides, we walked straight on! The longest line we had to wait in was maybe 30 minutes.

We had so much fun hanging out with Jake’s parents and screaming our heads off on the coasters. But we also realized we can’t “hang” anymore. Our heads hurt after some of the rides and we even felt a little nauseous. We’re really hoping it was the 18 miles and not our age!

Anyways, that was our, in the words of Cindy’s sister, “Jake and Cindy weekend” (one packed with back to back activities) 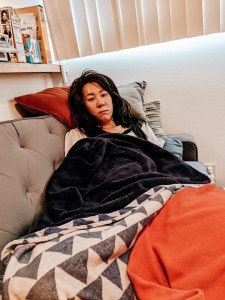 (this basically sums up how we felt Monday morning lol)