SO MUCH HAPPENED THIS PAST WEEK!!

Cindy finished her 4th year of teaching and is officially on summer vacation! When she first started out, a few of the more experienced teachers told her that it would take about 5 years before she would start to get into a groove and feel like she really knew what she’s doing. She was a little in disbelief…but is now realizing that it’s mostly true. She is finally close to the top of the learning curve and is starting to get a grip on this whole teaching thing. Fingers crossed that year 5 is a breeze.

Jake finished his first year of classes for his PhD program!! It was a pretty anti-climactic end… He came home and was immediately barraged by Cindy’s requests to help hang up curtains lol. Jake’s happy he’s done with classes, but the end is not quite in sight yet. He’s still got 21 hours of tests (finals and comprehensive exams) before he can officially say he’s survived this first year. He had to kick Cindy out of his office the other day because when she’s in there with him, she interrupts his studying every few minutes to show him memes lol.

Cindy and her family had an early Father’s Day celebration for her dad. Unfortunately, Jake couldn’t join in on the fun because he had to study for his finals, which were the next day. He’s starting to get bored and lonely from all the studying.

We’ve been running more consistently lately. We haven’t hit our goal of 20 miles a week yet, but we did run 6.5 miles with an average pace of 8:23! We’re pretty stoked about that.

And finally…the coolest thing to happen to us this week was running past Hudson Yang from the show Fresh off the Boat. We were out on a run when we ran past him. We thought he looked familiar but weren’t sure, so Cindy took to Instagram to ask him. Surprisingly, he replied and confirmed that we saw him! Hudson Yang is our first celebrity sighting in our nearly 10 years of living in LA! 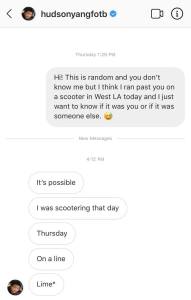 And that’s our week!