We spent a good deal of this past week in front of screens (TV, phone, video games). It was starting to make us feel lazy and icky, so we tried to do some non-screen time activities together!

We started a 1000 piece puzzle together. Jake admits he doesn’t like puzzling that much– partly because his color blindness makes it hard for him to tell the different colored pieces from each other and partly because he just doesn’t. Cindy, on the other hand, loves puzzling. She gets a little too obsessive. Once she sits down to puzzle, she can’t stop. 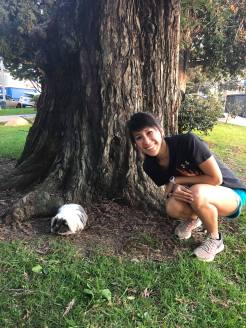 We thought it would be fun to take one of the guinea pigs out to the park for a walk. We bought them a leash about a year ago, and thought it was about time we used it.  We chose to take Oliver (the furriest one) because he’s the most inactive guinea pig. We thought he needed the walk the most, and we also trusted that he would be the least likely one to run away from us (because he doesn’t move, let alone do anything). In true Oliver fashion, he didn’t do anything. And we spent 30 minutes at the park just sitting on a rock waiting for Oliver to walk.

We love winter in Los Angeles. We get about one week of cold and the rest of the time it’s 70 degrees and sunny. After church on Sunday, we packed up our books and rode our bikes to the beach! It felt so good to breathe in ocean air! Jake has a rule that you always have to go in the water at least once whenever you’re at the beach. So, of course, he jumped in the water, which was very cold. Cindy doesn’t like that rule and doesn’t follow it.

And those are some of the non-screen time things we did together! Our resolution this week to reduce screen time even more.

One other thing we did this past week was help judge a speech competition. It was something new and out of our comfort zone, and we’re glad we did it. Although, Cindy is not sure she would ever do it again. She’s pretty sure her scoring sheets threw off the competition. She was so nervous about judging, she was probably more nervous than the kids who were up there. Jake, who did speech and debate in high school, was excited to help judge the competition. He might volunteer again.

And that was our week! We’re always looking for fun activities to do together that don’t involve TV or phones. If you have any cool ideas, let us know!