What a busy eventful week we’ve had! Here are the highlights of each day:

Monday: We had dinner and a game night with Cindy’s sister and her sister’s boyfriend. We all stayed up a little later than we should have, but we had a fun time. The game we played is called The Wizard Always Wins. It’s pretty fun! (if anyone is looking for game recommendations) 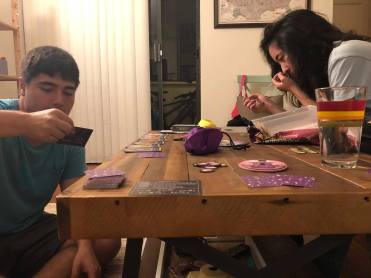 Tuesday: As Cindy was choosing an outfit to wear for the day, she noticed a big black blob on the moth trap in her closet. Upon closer inspection, she realized it was a giant cockroach. Jake, the knight in shining armor, helped her get rid of it. Who knows how long it’s been there for. But since then, Cindy’s bought more traps for every closet since she’s convinced it’s effective.

Also, Jake had his departmental, program orientation on Tuesday. The night before and the morning of, Jake got the first day jitters. Jake enjoyed getting to meet all the other admitted students. This whole PhD journey is beginning to feel so real.

Wednesday: We woke up at 5:30am to go work out! Cindy’s been going to morning TRX classes with a friend. Jake runs when Cindy’s at class. It’s so hard waking up so early, but doing it together makes it a little easier. We also feel so much more energetic for the rest of the day. This is our second week in a row with this routine and we hope to keep it going.

Wednesday was Jake’s first day of math camp!!! (if he passes math camp, then he doesn’t have to take an additional math class when school starts). Jake’s been scoping out the other students to see who he wants to be study buddies with.

Wednesday night, we went to go watch Searching with a couple of Jake’s friends. It was a pretty good movie! (if anyone is looking for movie recommendations). Before the movie started, a woman sitting at the front row got up to take a group picture of all her girlfriends (they filled up the entire first row). Cindy decided to put up peace signs and troll the picture. We realized when we got home that the woman taking the picture was Sara Sohn, who plays the wife in the movie. Now Cindy is embarrassed she trolled the picture. That’s besides the point though. It was a pretty cool feeling to know we saw a celebrity!

Thursday: Cindy had dinner with a girlfriend from bible study after work. That evening, Jake went to men’s discipleship group and Cindy went to the women’s one.

Friday: By Friday, we were starting to feel a little burnt out and like we haven’t had any quality time together all week. We made sure not to make any plans so we could spend some time together. We planned to run to the beach and ride one of those Bird Scooters along the bike path at the beach. When we got there we realized those scooters are banned from the bike path. So we walked along the beach and sat and watched the sunset instead. It was very romantic.

Saturday: We went to Cindy’s parents’ house to celebrate Cindy’s mom’s birthday. We spent the day helping out with some house work. Cindy’s sister and her sister’s boyfriend (who also went home) have been fixing up a door, so we helped (a little) with the finishing touches of that process. Jake helped take out some wasp nests. We took a one hour nap in the middle of the day. And that evening, Cindy cooked dinner for everyone. Jake loves Cindy’s cooking, so she never worries about cooking for the two of us. But when it comes’ to cooking for other people, she gets really nervous because she’s not the most confident in her cooking skills. We had a great time at home, spending time with family. 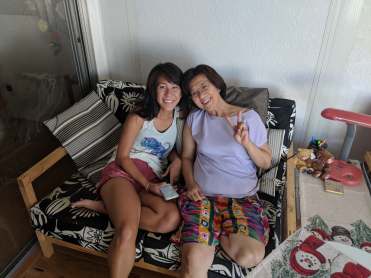 Sunday: Cindy spent the day relaxing and Jake spent the day doing some math homework for math camp. We found Rufus with a deep cut, so we patched him up. He lives life very dangerously for a hairless guinea pig.